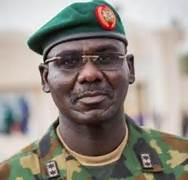 The Chief of Army Staff, Lt Gen Tukur Yusuf Buratai, has said that the Army may be forced to resort to military action in dealing with militancy by the Niger Delta Avengers (NDA), if talks fail.

The Chief of Army Staff who was represented by the General Officer Commanding, 82 division Nigerian Army, Major General Ibrahim Attahiru disclosed this at the commissioning of the headquarters of 2 brigade, an Olympic size swimming pool and other infrastructure at the brigade premises in Port Harcourt, Rivers State.
According to him, the Army would also provide security in the fourth coming legislative rerun election in the state, where civil authority may be over-stretched.