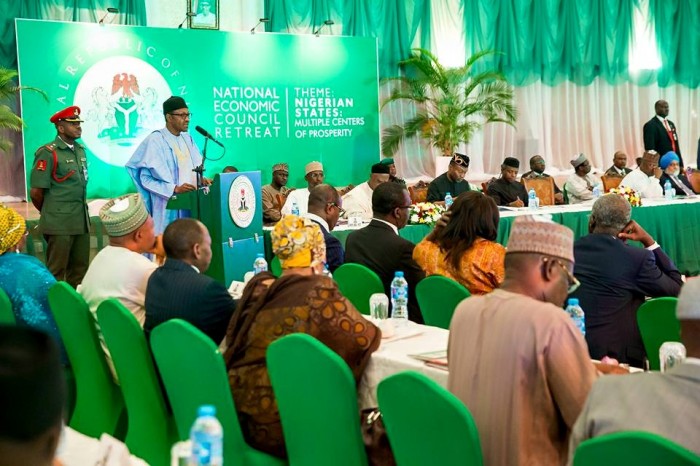 President Muhammadu Buhari on Monday said his administration has set a target of delivering 10,000 megawatts of electricity generation in the next three years.
The president, who stated this while addressing the National Economic Council retreat held at the State House, Abuja, said this year alone the administration would add 2000 megawatts to the national grid.
He said, “Nigerians’ favourite talking point and butt of jokes is the power situation in our country. But, ladies and gentlemen, it is no longer a laughing matter. We must and by the grace of God we will put things right.
“In the three years left for this administration we have given ourselves the target of ten thousand megawatts distributable power. In 2016 alone, we intend to add two thousand megawatts to the national grid.”
Mr. Buhari said the power sector had been privatised but admitted that that it had yet to show any improvement in the quality of service.
According to him, the common public complaints are constant power cuts destroying economic activity and affecting quality of life; high electricity bills despite power cuts; low supply of gas to power plants due to vandalization by terrorists; and obsolete power distribution equipment such as transformers.
Other complaints, he stated, are power fluctuations, which damage manufacturing equipment and household appliances; and low voltage which cannot run industrial machinery.
The federal government had two weeks ago apologised to Nigerians for the hardship and inconveniences power outage had caused them.
A statement by the Minister of Information, Lai Mohammed, said efforts were being made to rectify the situation and ensure a gradual improvement in the power situation.
“There will be a decent improvement in the power situation from this weekend, thanks to ongoing remedial efforts that will double the current power supply to 4,000WM,” he said.
“Getting back to the 5,074MW all-time high that was reached earlier will take a few more weeks.”
The government’s apology came three weeks after power supply dropped to a meagre 2,800 megawatts, the lowest in nearly a year.
A few days later, the Nigerian Electricity Regulatory Commission, announced that it had reached a new peak of 4,387 MW. It said the recovery followed the successful repair work on the damaged gas supply facility discovered earlier in the week.
In September last year, Vice President Yemi Osinbajo said the federal government planned to distribute 6,000 megawatts of electricity in the country by the first quarter of 2016.
He stated this at Kaleta in the Republic of Guinea, at the inauguration of a 240 MW hydro-power plant.
While campaigning for the presidential election last year, the All Progressives Congress, on which ticket Mr, Buhari contested, promised to expand electricity generation and distribution to 40,000 MW between four and eight years.
According to the party’s manifesto, “The APC Government shall vigorously pursue the expansion of electricity generation and distribution of up to 40,000 megawatts in four to eight years.
“The party will also work assiduously at making power available from renewable energy sources such as coal, solar, hydro, wind and biomass for domestic and industrial use, wherever these prove viable.”
The APC said power remained at the centre-point of development process, adding that all other indices of development anchor on it.
“The failure to make power supply efficient has impacted negatively on the economy. It has made the cost of production and business high and has invariably raised the cost of agricultural produce and other finished goods and services thereby thwarting the growth of our economy,” it said.
“The crisis in the power sector is one of the major causes of the present collapse of the industrial sector and the inability of small scale industries to thrive. To kick-start industrial growth in the country, stable and affordable power supply is an absolute necessity.”

Like Loading...
‹ APPLY FOR THE BANK OF INDUSTRY’S YOUTH ENTREPRENEURSHIP SUPPORT (YES) PROGRAMME
JANET JACKSON REVEALS HOW SHE ALMOST COMMITTED SUCIDE AFTER CONVERTING TO ISLAM ›