I AM NOW A DEBTOR BECAUSE OF 2015 POLL- JIMI AGBAJE 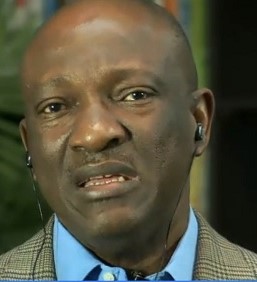 The governorship candidate of the Peoples Democratic Party in Lagos State, Jimi Agbaje, says the last general election turned him into a debtor.
Agbaje, who addressed party members at the PDP’s secretariat in Lagos on Tuesday, insisted that he won the governorship election.
The programme was organised ahead of the party’s forthcoming congresses and national convention.
The PDP governorship candidate, who spoke in pidgin English, however, said that despite the loss of the party in the last general elections, members of the party should shun bitterness and work to rebuild the party.
He said, “Some members were annoyed because the monies meant for the elections were not given to them to prosecute the last polls. I am angry too because the PDP won the last election in the state but was denied victory. I finish election, na gbese, I carry for head.”
In his remarks, a former Deputy National Chairman of the PDP, Chief Bode George, attributed the defeat of the party in the last general elections to a former Minister of State for Defence, Senator Musiliu Obanikoro.
The PDP chieftain, who lamented that indiscipline had been a major problem of the party, said the party would not tolerate factions under any guise because they were dividing the party.
George said, “Our victory was scuttled by evil characters who preferred the narrow position of the ministerial office than the collective esteem and honour of winning the governorship election in Lagos State.
“We were defeated by the agent provocateurs within our ranks. We were defeated by political renegades who merely invested in their own greedy and selfish interests.
“This cannot continue. Nobody is above the constitution of the party. We must either strictly adhere to the normative pattern of the party rules or we ship out. There will be no exemptions.
“The party is supreme. Enough of all these so-called groupings. Groupings do not build a healthy and strong national party. It is parochial and destructive.”
A former Minister of Works, Senator Adeseye Ogunlewe, urged members of the party to go back to their various wards to start rebuilding the party.
He said the forthcoming congresses would promote legitimacy, adding that imposition of candidates would not be tolerated.