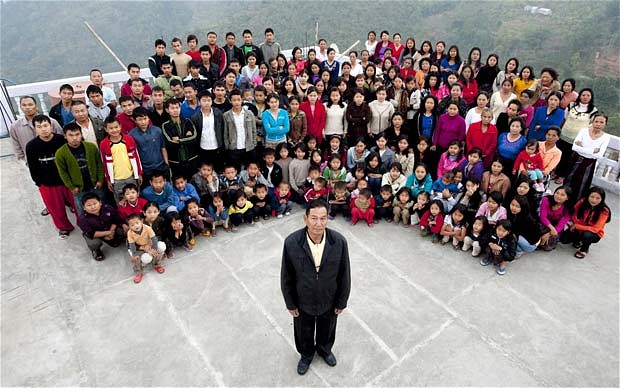 A 66-year-old man in India’s remote northeast has 39 wives, 94 children and 33 grandchildren, all living under one roof.
They all live in a four storied building with 100 rooms in a mountainous village in Mizoram state, sharing borders with Burma and Bangladesh, according to reports.
“I once married 10 women in one year,” Ziona Chana said.
His wives share a dormitory near Ziona’s private bedroom and locals said he likes to have seven or eight of them by his side at all times.
The sons and their wives, and all their children, live in different rooms in the same building, but share a common kitchen.
The wives take turns cooking, while his daughters clean the house and do washing. The men do outdoor jobs like farming and taking care of livestock.
The family, all 167 of them, consumes around 200lb of rice and more than 130lb of potatoes a day. They are supported by their own resources and occasional donations from followers.
“Even today, I am ready to expand my family and willing to go to any extent to marry,” Ziona said.
“I have so many people to care (for) and look after, and I consider myself a lucky man.”
Mr Chana met his oldest wife, who is three years older than he is, when he was 17.
He heads a local Christian religious sect, called the “Chana”, which allows polygamy. Formed in June 1942, the sect believes it will soon be ruling the world with Christ and has a membership of around 400 families.