Home › Uncategorized › OONI OF IFE: OBA SIJUWADE CO-CONTESTANT IN 1980 SAYS IT IS THEIR TURN

OONI OF IFE: OBA SIJUWADE CO-CONTESTANT IN 1980 SAYS IT IS THEIR TURN 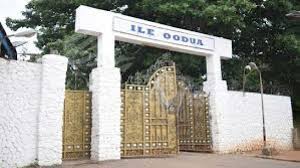 The Prince who contested with late Oba Sijuwade in 1980 when the stool became vacant following the demise of Oba Adesoji Aderemi has declared that his family which was denied the right to produce the Ooni of Ife since 1894 when the representative of his ruling house reigned in Ile-Ife is prepared to ensure that the family presents a candidate who will occupy the highly revered stool of the Ooni of Ife.
Prince Peter Adetola Ogunleye, on Wednesday posited that  the highly revered Ooni’s stool can not be occupied by just any individual who has no right to the royalty, just as he noted that its the turn of Giesi to produce the next Ooni.

Speaking on the way and manners in which new Ooni would emerge, the  83-year old lawyer and prince from the Giesi ruling house of Moore quarters in Ile-Ife believed that the stool of Ooni not only in Yoruba land but in the world at large cannot just be occupied by any individual who has no right to royalty by birth or lineage.

Since the announcement of the passing of the late Ooni of Ife, Oba Okunade Sijuwade Olubuse 11 was made, a lot of princes from the ancient city of Ile-Ife believed to be the cradle of the Yoruba race have been signifying intention to occupy the vacant stool.

Recently, a priest from Ife contended that custom, tradition and all necessary rites would be accorded their rightful place before the stool is occupied. He also stressed that this time around, the Giesi Rulling House is set to produce the new Ooni because it’s the turn of the ruling house.

Prince Ogunleye recalled how his family signified intention to occupy the stool of Ooni in 1930 but was denied, adding that a similar thing repeated itself in 1980 when he attempted to be made the Ooni of Ife, but lost to Oba Sijuwade despite legal battles.

He contended that there are four ruling houses in Ile-Ife and the four houses are Giesi, Lafogido,Osinkola and Ogboru, adding that the last time an Ooni from the Giesi ruling house reigned was in 1894 and the Ooni then was Oba Derin Ologbenla.

Ogunleye stressed: “My own great grandfather known as Ooni Kunbusi reigned between 1849 and 1878. In other words, the last time we occupied the throne of Ooni was in 1894. However, the order of ascendancy remains the same. After Ogboru ruling house where Oba Sijuwade hailed from, it  is the Giesi ruling house. So, it is the turn of my family to produce the next Ooni of Ife’”

Because the chieftaincy acts guiding the selection and appointment of the Ooni of  Ife states that “the Secretary of the competent council shall not later than 14 day after the occurrence of the vacancy announce the name of the ruling house entitled according to customary law to provide a candidate or candidates as the case may be to fill that vacancy.”

We are yet to receive the letter from the relevant authority, but we are expecting the letter knowing full well that it is now our turn to produce the next Ooni of Ife.”

“We always showed interest in the stool whenever there was vacancy, but we were always denied. In 1930 we attempted but Oba Adesoji Aderemi was selected and appointed the Ooni, in 1980, I was presented by the Giesi ruling house, but Oba Okunade Sijuwade from the Ogboru ruling house emerged. It is important for me to say that in 1980 when I contested, there was a chieftaincy declaration which stated that Giesi was the next ruling house.

It was a registered declaration, but we couldn’t have our way in the long run. So, the bottom line is that it is now the turn of Giesi ruling house to produce Ooni,”he insisted.