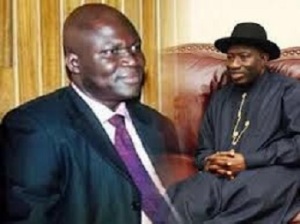 Reuben Abati, former presidential spokesman, says former President Goodluck Jonathan is under pressure from local and international media to grant interviews. In a syndicated opinion published on Sunday, Abati did not disclose the areas of interest of the journalists but said Jonathan was not ready to talk now.

Since he left power on May 29 after losing the March 28 presidential election, Jonathan has hardly made any public comments apart from asking Nigerians to pray for President Muhammadu Buhari over the Boko Haram attacks in a post on facebook.

Abati wrote: “[There are requests from] those who want interviews with President Jonathan, both local and international – they want his reaction on every development, so many of them from every part of the planet.

But he is resting and he has asked me to say he is not ready yet to say anything.” Some of the issues that have been in the public sphere since Jonathan’s exit are the debt overhang, which is estimated in N7 trillion by the Joda committee, alleged oil theft by ministers estimated at one million barrels per day by Buhari, and unauthorised withdrawals from the excess crude account which Adams Oshiomhole, governor of Edo state, said were used to fund Jonathan’s campaign.

Many of the appointments made by Jonathan have also been upturned by Buhari. However, Boko Haram has re-launched attacks and killed about 500 persons since Jonathan’s exit, a development that might have drawn the attention of the international media.

Buhari also recently went to the US and openly complained that the American government refusal to sell arms to Nigeria because of reported human rights abuses was affecting the war against Boko Haram — a position that Jonathan would feel has justified his own claims all along.

Abati also recounted his own days in government and the pressures he came under from the public, sharply contrasted with the situation since Jonathan lost the election.

Like Loading...
‹ WE ARE BEHIND TOYIN SARAKI’S ARREST BY EFCC, NOT TINUBU, APC-KWARA STATE PDP
SOYINKA IS A BAD POLITICIAN AND A SUCCESSFUL ‘APARO’ HUNTER-OBASANJO ›