The All Progressives Congress member in the House of Representatives, Nasiru Sani Zangon Daura, representing Zango/Baure Federal Constituency of Katsina State, has issued a press statement on the physical battle that ensued in the Green Chamber during plenary on Thursday.

At the plenary, the tension and divided interest among the legislators led to a brawl between the two factions in the chamber.

The statement reads, “We are here on behalf of our colleagues of the APC House Caucus to explain to you the unfortunate occurrence during today’s plenary session. 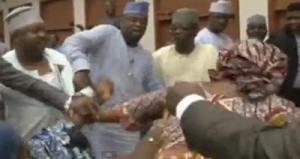 “The action that occurred inside the chamber of the House of Representatives was in reaction to the illegal and unconstitutional action taken by Speaker Yakubu Dogara of the House of Representatives, an action in his usual tradition of total disregard to the wishes of the majority members of the APC Caucus, the Party itself and the spirit of the Party.

“This letter by the Party is in compliance with the expressed wish and mandate of the Majority Members of the APC Caucus in the House of Representatives.

“This action of the party and the APC House Caucus is in compliance with the Nigerian Constitution, the House rules and parliamentary tradition, practices and precedents in Nigeria and all over the World.

“But to our surprise and in breach of our privilege and rights as contained in the Constitution and extant House Rules, Mr. Speaker refused to read the letter from our party.

“Therefore, Speaker Yakubu Dogara of the House of Representatives cannot under extant laws and House rules appoint, choose, select, dictate or even provide guidance on how Party Principal Officers emerge or are elected or selected. That responsibility and authority lies with each Party and Party’s Caucus members in the House.

“If I may ask, is Speaker Yakubu Dogara empowered to do that for the PDP House Caucus?

“This action by Speaker Yakubu Dogara cannot and will not be allowed to stand as it will set a dangerous precedent in our parliamentary practice as it will give the Speaker the right and authority to appoint, choose, select, dictate or even provide guidance on how Principal Officers emerge or are elected or selected by the Majority and Minority Parties in the House of Representatives. This action is capable of truncating our democracy.

“As for the claim being made that a particular zone should not be allowed to produce more than one Principal Officer, we say this with all sense of decorum, that this claim is absolute rubbish.

“Precedences were set in the 6th & 7th Assemblies where a single zone, the North-West, produced two and three Principal Officers, respectively.

“We, the loyal and disciplined majority APC Caucus in the House of Representatives are fully committed in ensuring that our party’s and President Muhammadu Buhari’s manifesto, agenda and positions prevail despite the efforts and shenanigans of the opposition party(s) and the few disloyal and undisciplined APC party members in the House of Representatives.

“We are determined in our efforts to utilise all legislative strategies available to us, so as to ensure the compliance with due process and democratic norms and values.

“We the loyal and disciplined majority APC Caucus in the House of Representatives and the All Progressives Congress have dished out enough of the carrots, it’s time to crack the whip so as to ensure party discipline and maintain order.

“Dare I say, we rode to power on the platform of the party, the party is supreme and thus no one is above the party.

“God Bless the All Progressives Congress.

“God Bless The House of Representatives.

“Thank You for listening.”